Popularised and made more accessible by the gaming world, virtual reality is finding new outlets in the industrial sector. The activity is furthermore rapidly expanding in industry, following a dizzying 400% growth in 2017 according to the firm ABI Research. Boeing, Safran and Airbus among others use it within their factories daily such the benefits are substantial. While the initial investment represents a cost, the ROI on the other hand is substantial.

Simple to put in place within factories, virtual reality devices create major advantages for industrial companies. Operators can be trained in real conditions for example as they are literally immerged in the future production line. So they have the chance of understanding how the future machine will work or the future robot to be used onsite.

Virtual reality can also be most helpful in understanding how several elements must be assembled with one another or even anticipating production speeds with the production manager.
Safran, Boeing or Airbus systematically use it to rationalise production costs. Operators are better trained, there are therefore fewer errors. Production time is also brought down to a strict minimum.

A convincing example of increased productivity is that of Airbus.

To check the correct positioning of 120,000 brackets, small parts included in producing planes, the aircraft manufacturer uses virtual reality headsets. Work that requires the intervention of three people for three weeks without the device and that now only requires three days for two people. Considerable time-saving for the operator and therefore for the company.

The industry of the future is now!
Discover the integration of virtual reality with the Arena Simulation software

A profitable investment for industrial companies

Although for the first few years back when virtual reality devices were launched the cost of buying them was crippling – several hundreds of thousands of euros during the 1990’s for a headset and software – things have changed considerably.
On the one hand, costs have fallen, representing a few tens of thousands of euros for small and medium sized companies and mid-sized business, with public financial handouts lightening the initial investment even more. But we’re talking about an investment and not a straight expense as industry sector companies benefit from a consequent ROI .

Considerably less time is spent training operators. Better trained operators also trained more quickly are in fact more efficient in carrying out their different tasks. Gestures are known in advance, repeated, synchronised with another operator or a machine. Errors are thus reduced. These are some of the many aspects that positively influence a company’s performance. Better productivity, greater production speed, time reduction are some of the many strong points that the technology generates.

Virtual reality is also beneficial from a factory manager viewpoint too. They have the chance to visualise the future arrangement of the production line in advance, and in a workshop that is still empty. On top of that there are several benefits like the chance to plan for the optimum installation of machines for maximum output.
Also virtual reality is a big help in reducing RSI (repetitive strain injury). Difficult working conditions remain one of industry’s biggest challenges and virtual reality means rising to these challenges. Technology offers you the chance to picture the best physical posture to adopt at a workstation in advance. Or to even optimise the number of gestures to be made by an operator or plan the production line to be as ergonomic as possible.

If we are tackling the subject of virtual reality at Techteam today it’s because we have understood and seen how important this issue is in the industry of the future. As a consulting firm, our main mission is to support manufacturers in their choices. But we had noticed that sometimes the projection of considered solutions was difficult, especially as the visions and what is at stake for stakeholders are not always the same between operations and strategy. Armed with our Arena Rockwell™ tool, we have devised a way to overcome this constraint to provide even more comfort and safety in the decisions made by our clients.
This is how the Arena Rockwell™ solution came about, adapted by our partner Light & Shadows, a virtual reality agency. We are thus developing dynamic simulation models with our clients that are then developed in virtual reality.

You want to know more about Arena in virtual reality? We tell you more in this video >>

Virtual reality devices represent a certain cost. A cost that has furthermore clearly decreased since the technology and its tools are becoming more widespread. It’s above all an investment from which companies can benefit in a big way in terms of increased productivity. Now, it’s no longer a case of wondering whether virtual reality will end up in your factory one day or not, it’s about thinking about how it will change your industry in the future.

The future of industry is now! 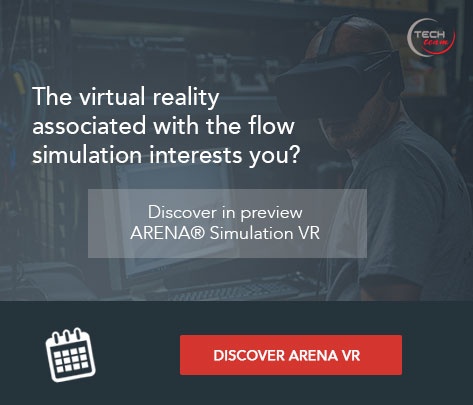